Sorry, but the 1979 Cheoy Lee 38 listing has already been removed.

Get an email notification when another vessel like this is listed

We also have the following similar vessels currently advertised: 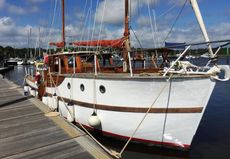 38ft. CHEOY LEE KETCH MOTOR YACHT - Recent Refit   £60,000
HISTORY and DESCRIPTION: SHAMEEN designed and built by the highly respected Cheoy Lee Shipyard in Hong Kong in 1958. Shortly after being commissioned, she was sailed to Singapore before, in 1960 coming to Poole in Dorset in the ownership of R Y Frost of Canford Cliffs. In 1963 W G C Williams of Hayle in Cornwall purchased SHAMEEN keeping her in St Ives Harbour. A H Dallimore became the next registered owner moving the vessel to St Martin’s on the Isles of Scilly in 1970 and then to Oban in 1978 when he moved to Scotland. In new ownership, SHAMEEN was sailed to the Med and back. After ... read more

Boats for sale
by continent

Boats for sale
by country